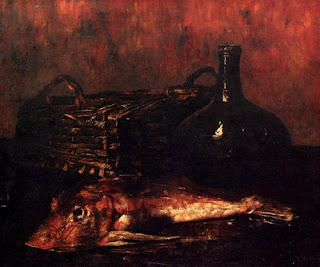 Antonie Vollon, (1833-1900) was a gifted and prolific French painter that excelled in landscape, marines and still life painting. Born in Lyon, the young Vollon apprenticed to an engraver and attended the Art school there. Quickly mastering the skill of oil painting, he made the still life his focus as a motif, no doubt influenced by the great 18th century French still life painters, Jean-Baptiste-Siméon Chardin (1699-1777) , Anne Vallayer-Coster (1744-1818), and Jean-Baptiste Oudry ( 1686 – 1755). In 1859 the young painter goes to Paris and finds the artistic mileau which feeds his art spirit, making friends with Phillip Rousseau,( 1816-1887), Eugène Louis Gabriel Isabey (1803 – 1886), Jean-François Millet (1814 – 1875), Augustin Théodule Ribot (1823-1891) and many of the so-called Barbizon painters. Among his friends is Alexandre Dumas, with whom he accompanies to the Normande coast. It is there that he discovers Mers le Bains, a small fishing village on the coast where he makes his studio , marries and lives for the next 20 years. What interested the artist in this rural village was precisely the proximity with the sea, which of course served its interest for the marine landscapes, but especially provided it for the fish still lives. Vollon also painted landscapes of the port of Tréport near Mers-les-Bains, was interested in the fishing vessels and made some portraits of fishermen. Vollon's painting technique is typified by a dark ground, and alluring paint quality, which he created with a swift alla prima technique coupled with translucent varnish mediums. Perhaps influenced by Rembrandt and Velasquez, Vollon and his fellow Barbizon style still life painters, explored this moody and seductive style of painting which would be seen later to exert great influence on the next generation of painters such as William Merrit Chase (1849-1916), Frank Duveneck (1848-1919),and Charles Webster Hawthorne (1872-1930). 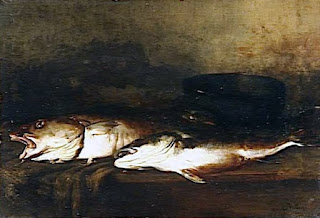 Posted by keith gunderson at 4:44 PM No comments: Links to this post 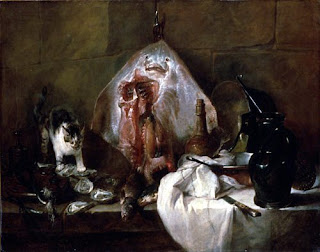 Jean-Baptiste-Siméon Chardin (1699 –1779) was an 18th-century French painter. He is considered a master of still life.He favored simple yet beautifully textured still lifes, sensitively handled domestic interiors and genre paintings. Simple, even stark, paintings of common household items, are elevated to an iconic idealization through his uncanny ability to capture the effects of light. He was a master of textures, shapes, and composition, and his impeccable drawing skill reflects his thorough understanding of the volumetric occupancy of space. This understanding of the three dimensional matrix allowed him to fill his paintings with the soft diffusion of light which appear to fill the air around the objects he painted. His brush carresses the form almost as if it emulates the light which passes over and reveals. One can feel the delight he had in painting the reflected lights and shiny glints of light which emerge out of the shadow. Largely self-taught, he was greatly influenced by the realism and subject matter of the 17th-century Dutch and Flemish masters. In 1728, The painting illustrated here, The Ray, gained for him admission to the Académie Royale de Peinture et de Sculpture.His love of truth and nature endeared him to advanced thinkers in France, the encyclopédistes in Denis Diderot's circle. Detecting a moral value in Chardin that was lacking in Boucher, Diderot became his chief intellectual supporter. "It is the business of art," he argued in 1765, "to touch and to move, and to do this by getting close to nature." Chardin epitomized that ambition at work: "Welcome back, great magician, with your mute compositions! How eloquently they speak to the artist! How much they tell him about the representation of Nature, the science of color and harmony! How freely the air flows around these objects!" "This is unfathomable wizardry. Thick coats of color are laid one on top of another, and their effect transpires from below upwards. At other times one might suppose that a mist had blown over the canvas: or again that a light foam had been thrown over it Draw close and everything becomes blurred, flattens out and disappears: draw away and everything is recreated and reproduced." 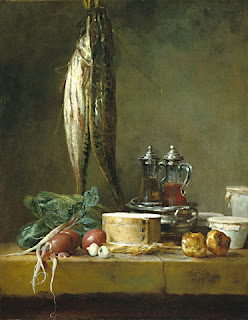 Posted by keith gunderson at 12:16 PM 2 comments: Links to this post 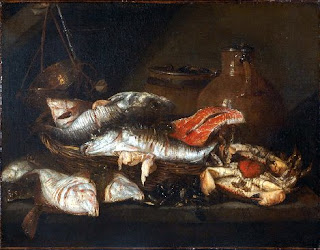 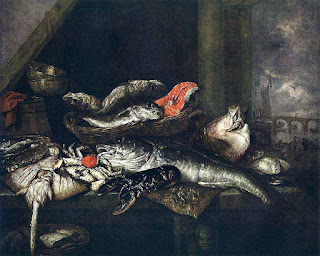 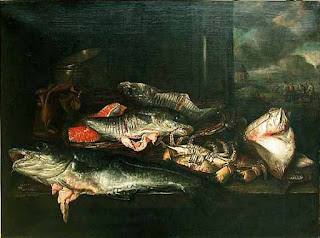 The Dutch painter Abraham Henrickszoon van Beyeren (1620-1690), still life painter extroardinaire, was known primarly for his seascapes, table pieces, and fish still lives . A native of The Hague, the artists also lived in Delft, Amsterdam, Alkmaar and Gouda. In 1678 he settled in Overschie, where he died in 1690. While in the 1640s most of his paintings were seascapes, Van Beyeren began to develop as a skilled painter of still lifes with fish. Van Beyeren was obviously influenced by the theatricality of Snyders yet the hyper detail and careful composition seems more in common with Willem Claeszoon Heda or Jan Davidzoon de Heem. In the three examples of his work above, the similarities between the paintings would suggest that they were all painted from the same setup. This further suggests that Van Beyeren was more interested in the pictoral aspects of the objects, such as composition and shape rather than the narrative. 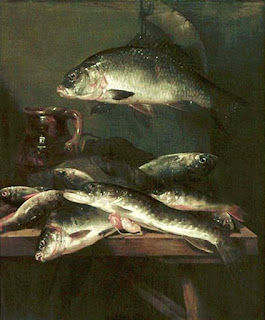 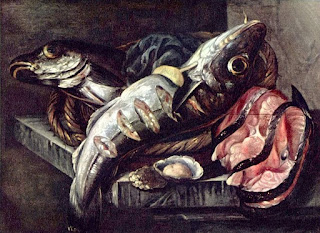 Posted by keith gunderson at 9:18 AM No comments: Links to this post 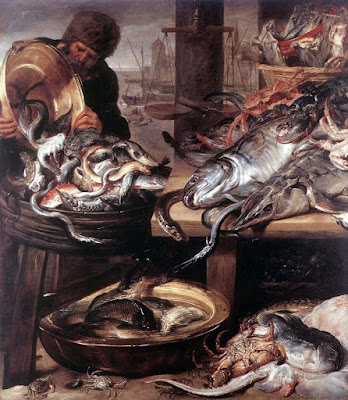 One of the more distinct genres encompassed in Still Life painting is the Fish Still Life. Apparently, its origins lie in the "pronk" or "table pieces" of the late 16th and 17th century where Dutch and Flemish artists executed themed still life paintings for their wealthy patrons. One of the first and certainly one of the most gifted of these painters was Frans Snyders (1579 - 1657). Snyders was born and died at Antwerp. He is recorded as a student of Pieter Brueghel the Younger in 1593 and subsequently received instruction from Hendrick van Balen, the first master of Van Dyck. He was a friend of Van Dyck who painted Snyders and his wife more than once, Snyders initially devoted himself to painting flowers, fruit and subjects of still life, but later turned to painting animals, and executed with the greatest skill and spirit hunting pieces and combats of wild animals. His composition is rich and varied, his drawing correct and vigorous, his touch bold and thoroughly expressive of the different textures of furs and skins. His excellence in this department excited the admiration of Rubens, who frequently employed him to paint animals, fruit and still life in his own pictures, and he assisted Jacob Jordaens, Thomas Willeboirts Bosschaert and other artists in a similar manner.With an amazingly sympathetic and discerning eye, Snyders masterfully captures the nuance of light as it passes over the varied colors and textures. The fish glisten in the theatrical light of the studio. There is also a self-conscious delight the artist takes in the way paint can mimic the effects of light on the objects, most evident in the contrasts between the textured impastos and smooth silky brushwork. 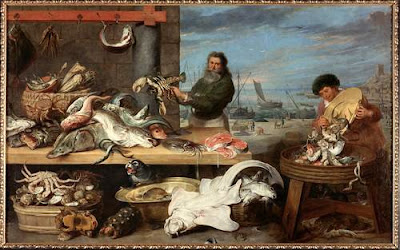 Posted by keith gunderson at 9:52 AM No comments: Links to this post 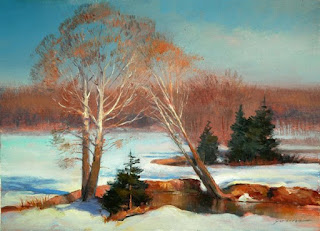 This winter scene illustrates the concept of how darkening the sky value or "pitch" can strengthen the appearance of light on snow. It also serves as a great contrast foil against which the painter can place the tracery of branches and limbs illuminated by winter light. Emile Gruppe and his sympatico artist friend Carl Peters were experts at this technique.
Posted by keith gunderson at 9:26 AM 1 comment: Links to this post

Winter on the Hudson 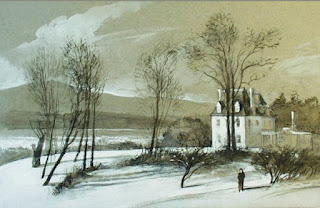 Here's little watercolor and gouche painting I did en plein aire at Clermont, the site of Livingston Manor, one of the grand old mansions from the 18th century which line the banks of the Hudson River. It was quite cold that day and I was the only person around, although I couldn't resist putting a person in close to the nexus point( Euclid's "Eye of God") which lies at the golden mean spiral origin. Sepia, Chinese White on Canson Moonstone.
Posted by keith gunderson at 9:11 AM 1 comment: Links to this post 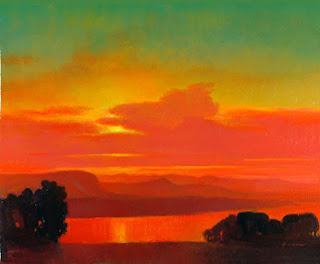 This painting was an exercise in color from a sketch I made at the Vanderbilt estate along the banks of the Hudson in Hyde Park New York. I tried to keep the pitch down using fully saturated color so that the sun would have sufficient contrast- much the way one would pitch the sky in a snow scene lower in value in order to make the snow appear bright. The foreground trees are silhouetted in dark values to establish the vignette and range of tone. I alternated cool and warm reds in the clouds to distinquish between the sky vortex (light filled air) and the cooler cloud shapes. In the sky zenith(top of the vault), I substituted a thalo green-viridian mixture without any blue to push the color contrasts between the red and greens. I suspect this kind of color layering and emphasis is what Rothko was exploring in his "landscapes".
Posted by keith gunderson at 8:55 AM 1 comment: Links to this post 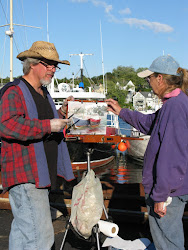